Reason discloses to fan how he has tried working with A-Reece and it all failed.

A fan asked for a collabo from the two, but Reason says he’s tried to make it happen. 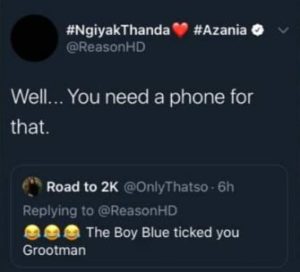 Then again, fans asked Reason to try harder but Reason to have tried enough and respect A-Reece for his personal space.

It’s shows that A-Reece isn’t interested in working with Reason but still there was never a beef between this two rappers.